The only exercise I get is from jumping to conclusions

Source: Head Over Heels for the Boss (Donovan Brothers #3)

If you write and have the cheek to bring those word-assembling activities up while around polite company, someone, somewhere, sometime is going to say that thing we all eventually hear.

“I don’t know how you come up with all those stories.”

You’ll lie because we’ve all been taught to. Maya Angelou, the most exalted grandmother-lady in American fiction told lies to you about her cats and rats and mats and how she types them for weeks, waiting as patiently as only Maya Angelou could for the real words to return so she could get on with the business of telling her stories. You’ll repeat Anne Lamott’s lies about shitty first drafts and you’ll tell those well-meaning members of the polite public the lie Margaret Atwood told you about fearing perfection. After all Stephen King says we have to finish, no matter what, that meeting…

Type: Novel in a Series

Blurb: See the world of Fifty Shades of Grey anew through the eyes of Christian Grey.

In Christian’s own words, and through his thoughts, reflections, and dreams, E L James offers a fresh perspective on the love story that has enthralled millions of readers around the world.

Christian Grey exercises control in all things; his world is neat, disciplined, and utterly empty—until the day that Anastasia Steele falls into his office, in a tangle of shapely limbs and tumbling brown hair. He tries to forget her, but instead is swept up in a storm of emotion he cannot comprehend and cannot resist. Unlike any woman he has known before, shy, unworldly Ana seems to see right through him—past the business prodigy and the penthouse lifestyle to Christian’s cold, wounded heart. 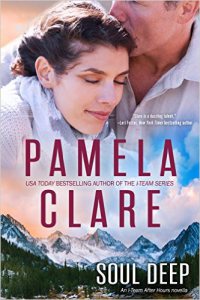 Blurb: Rancher Jack West knows what it means to love a woman with all his heart and to lose her far too soon. A widower for seven long years, he thinks love and romance are a thing of the past, nothing more than cherished memories. He devotes himself to his grown son and his family, the horses they raise, and the land that has been theirs for three generations. He doesn’t know that life has a surprise in store for him in the form of Janet Killeen, the lovely FBI agent he threw off his land last winter.

The bullet that left Janet Killeen seriously wounded also tore a hole through her life. All she wants is a little peace and quiet in the mountains, a chance to feel like herself again. That…

The yin to my yang. The loud to my quiet. The crazy to my… crazy. He is my constant companion and I make him calm. And to an anxious, ADHD on the spectrum kid, that’s a big deal. Sometimes I don’t give myself credit. But I will. Let’s hope as I catalog the journey I’ve taken with my little and big and the oldest who’s now decided she wants to have ADHD too so she can be special… maybe I can write myself a solution. Or a lullaby so at least I can sleep. Because I know if you’ve got one, you don’t get much sleep either.

e a day with Flat Stanley! First, we cut Stanley out and picked his colors carefully. We colored him and got him ready for his day. We got into the car and headed out. We started our errands at Walgreens, but next door was the Whataburger,

which is the best place to eat hamburgers in Texas, bar none! But it was too early and I told Mason and Stanley “NO!” and they got in the car and we continued.

We headed to get gas at Kroger’s and went to the Texas A&M University Memorial Student Center so that we could get a photo with the big Aggie ring.

It’s a tradition for students who are graduating and get their Senior Ring to take their picture with their family under it. So Flat Stanley and Mason walked around with me to the back of the Student Center and took a picture under it, and at the same time we got some shots of the newly renovated Kyle Field, home of the Fighting Texas Aggies!

We’re very proud of our stadium—did you know that it can hold 80,000 people?! That is more people than live in our whole town! And we can see and hear it from our backyard.

Mason’s daddy works on campus not too far from the George H. W. Bush ’41 Library, which is where we made our next stop. There is a really neat statue outside of the Library of wild horses leaping over the pieces of the Berlin Wall that President Bush received from the German government.

Mason thought Stanley was going to jump out of his hand onto one of the horses he was so excited! There is also a piece of steel bar from one of the World Trade towers from Ground Zero from September 11th.

Next we went to one of our favorite places to eat called Blue Baker.

It’s a local restaurant, and if you dress all in cobalt blue, they will give you a free cookie! And sometimes they have really wacky contests. We love it and Stanley reeeeaaaallllllyyyyy wanted a cupcake! There were so many to choose from, but Mason and I both decided on brownies so he decided he would have a taste from both of ours. I got the peanut butter brownie and Mason got the fudge brownie with nuts. Stanley loved both!

As we were leaving Blue Baker, Stanley was checking out all the different apps and job listings posted on the door. He told us he might be moving here! Mason and I think he might really be in love with the pizza and the cupcakes and the brownies. Plus, we kept finding him hiding in the bread displays. I’m not sure he really needs chocolate cappuccino bread, are you? Yikes! He’s already busy enough.

And he really seemed to be getting into the Christmas season decorations that they had set up! He kept hugging this Aggie Santa painted squash! We also happened to see one of our friends Brian “Smitty” Smith and his wife Aimee while we were there. Brian is a member of Texas Task Force 1. You will learn more about them in the next part of our story. (Mason looks grumpy—I think he and Stanley were thinking about the pizza we were waiting on, don’t you?)

Texas A&M University has several agencies under its umbrella, and one of those is Texas A&M Engineering Extension Service, and they train firefighters, police officers, and rescue workers and sponsor Texas Task Force 1, one of the 28 FEMA-approved Search and Rescue teams deployed on 9/11. TX-TF1’s canine Bretagne was recently nominated for Hero Dog of the Year for her services as a therapy dog by the American Humane Society. They train out at Disaster City—and that’s where we took Stanley next.

He wanted to check out the wrecked Amtrak train behind the sign, so Mason took him over for a closer inspection.

Now we’re home and Stanley is pooped. We’re getting ready to send him home to your class.

I’m always curious about how fictional characters spend the holidays.  Who is surprisingly festive and who is surprisingly… not?  Rhys Ford was kind enough to write a Thanksgiving ficlet about the abundant and gregarious Morgan family.  I was not surprised Miki hid out with a bottle of hootch, but he did manage to surprise me.  Brigid and I are very thankful. ~ Faye

“Them downstairs? They’re fucking loons.” Damien shivered as he plopped down next to Miki, nudging his best friend over so he had space on the bean bag nest Miki’d made against a dormer window. “Mad as fucking hatters, the lot of them.”

Blurb:  Seattle Homicide Detective Jim Shea never takes work home with him—until now. A judge banged his gavel, declared a defendant not guilty, and laid waste to a family. The emotional fallout of the trial leaves Jim vulnerable and duty-bound to the victim’s dying father.

It’s that man’s story that screenwriter Griffin Drake and his best friend, actress Daisy Baylor, see as their ticket out of action blockbusters and into more serious fare. But to get the juicy details, Griffin needs to win over the stoic and protective Detective Shea. Their attraction is immediate, and Daisy encourages Griffin to use it to their advantage: secure the man, secure the story. Neither man has had much luck when it comes to love, and…